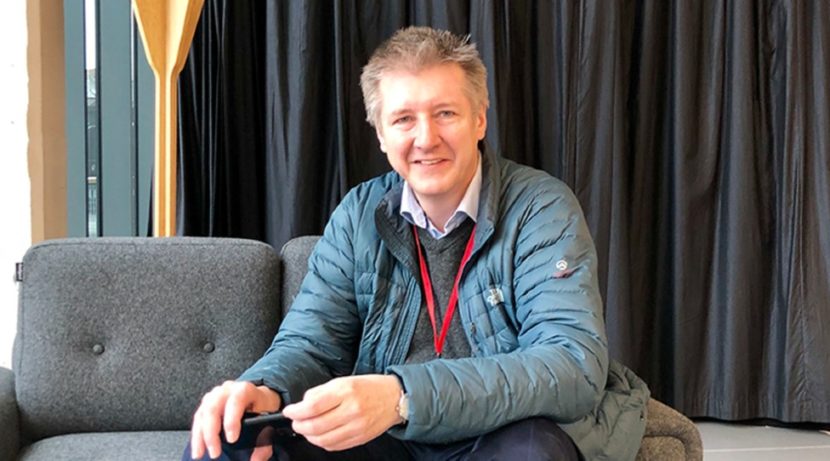 This North East business is blazing a trail in the low carbon energy market through their electric vehicle battery innovations.

“If you’re working in renewable energy and future mobility, then Newcastle is a good place to be right now” I’m told by Matthew Lumsden, CEO and Founder of cleantech start-up Connected Energy, based at The Core. He qualifies; “In fact the North East, and specifically right here on Newcastle Helix, is the place to be if you want to be a significant player in the UK and indeed globally.” And Matthew should know. He founded Connected Energy in 2013, after successfully selling a renewable energy consultancy, which he and colleagues built from the ground up in Newcastle and Manchester.

A successful entrepreneur, Matthew proudly champions the lifestyle and business opportunities the North East presents as he describes the Connected Energy mission; “In layman’s terms, Connected Energy provides a second-life for the batteries used in electric vehicles. By repurposing batteries, we can double their lifespan, maximising the value of the embedded carbon and other resources, and generating income for customers who sell energy flexibility services to National Grid.”

This month the UK Government announced plans to ban domestic sales of new diesel and petrol cars by 2035, shaving five years off their original target. One of the questions this policy has raised relates to the environmental on-cost of electric vehicle battery production; an issue Connected Energy has been innovating to address for the last seven years.

Batteries from the first electric vehicles to hit our roads in 2010 are coming to the end of their automotive lives. Using the batteries from early-adopters, Connected Energy is already delivering market-ready energy products throughout Europe. These products give a second life to batteries before they are recycled, whilst also generating an income stream for their hosts. The business has been through seven years of future planning, market analysis, R&D and several significant rounds of fundraising and investor relations in preparation for the planned scale up.

Connected Energy relies on two critical areas of expertise, and it’s no surprise that its two centres operate from the UK locations that best align with these; ensuring superior access to talent, collaborators, suppliers and customers.  Connected Energy’s Technical Centre is led by Technical Director Ian McDonald and is based adjacent to the Lotus manufacturing site in Norfolk. Home to 18 team members with extensive automotive and battery technology experience, the Technical Centre leads on all R&D, design and supply chain processes. The Core, Newcastle Helix is where Matthew and the wider big data and commercial team base themselves.  And like most things Connected Energy do, there is a very good reason for this.

French multinational electric utility company, ENGIE, are the sole providers of energy to the 250 acre Newcastle Helix site. Connected Energy secured major investment from ENGIE following their move to The Core in 2017. Matthew and the wider team are also working closely with The University of Newcastle, who are tenants at The Core, and one of three major Newcastle Helix Investors (partnered with Newcastle City Council and Legal & General). Two internationally significant collaborations between Connected Energy and the University include a big data venture with Newcastle’s National Innovation Centre for Data and a research project with the Department for Electrical Engineering, to study how automotive batteries degrade.

With an eye on the prize, Connected Energy’s relocation to The Core three years ago was seen as a strategic move to facilitate growth and new partnerships as CEO, Matthew, explains:

“When we moved to The Core we were a team of two. We now have seven people working from our Newcastle office and 25 people in total. We’re planning to recruit a further four roles in Newcastle this year and probably eight in Norfolk.  We have been through several significant funding rounds since we’ve been here and have achieved investment from Australian, French and Japanese companies as well as major R&D investment and innovation partnerships from UK organisations. Newcastle Helix is a magnetic location for investors, collaborators and the talented people we need in our teams. And more generally, the North East is fast becoming a destination for offshore renewable energy solutions; which brings with it a wealth of opportunity.”

The Electric Vehicles Market is expected to grow by 21.1% over the next decade according to growth analysis by MarketforMarkets; that’s an estimated 27 million electric vehicles on our roads globally by 2030. This is perhaps a cautious appraisal, considering the political (and actual) climate; compelling road-users to convert to this zero-emissions mode of transport.  But perhaps it is based on the knowledge that the next ten years needs to deliver huge advancements to charging infrastructure and a reduction in price point to make electric vehicles a viable alternative.

So here we stand, in Newcastle, at the start of a new decade. The road ahead promises growth and opportunity for electric vehicles. The road behind, still short enough that the path-travelled is a present reminder, if we needed one, of how far we’ve already come.  Connected Energy and their second-life batteries launched out of a £3.6m government contract to develop a proof of concept. Outside of China, Connected Energy is the only business to deliver this type of commercial system. No doubt this is supercharging Connected Energy’s growing reputation in the renewable energy and circular economy sector. They were one of only 12 homegrown businesses to represent the UK at the COP 25 climate change conference in Madrid last year and are partners of the Ellen MacArthur foundation. The team recently won the North East Automotive Alliance SME Innovation award in recognition of their novel second-life systems.

Future plans for the company include more growth within The Core, managed by Creative Space Management, and an expansion of their overseas sales to US markets. As more electric vehicles come into play, demand for this second-life battery options are set to grow, and Connected Energy are gearing up to deliver this.

If you are interested in learning more about The Core or you have a workspace enquiry, we’d love to hear from you. Please contact info@thecorenewcastle.co.uk

« Ever Wondered What It’s Like To Be A Centre Manager?Growth For Grid Smarter Cities »